On November 30, 2011 Ron Paul released an ad that attacked Newt Gingrich on everything he ever did that he talks against.

As more and more releases have came out on Romney's flip-flops, and Ron Paul keeps rising in Iowa; can Ron Paul now win thanks to Mitt Romney of 4 years ago?

Originally Composed by Socialist Francis Julius Bellamy (a Baptist Minister, Author, and an Editor). Francis in 1892 published the original Pledge of Allegiance in The Youth's Companion. The reason for the Pledge though wasn’t for a selfless reason to Pledge to the Country, it was to sell tons of flags at the time. And instead of putting your hand on your heart, you were to do the Bellamy Salute (which is mostly known as the Nazi Salute now, but first Francis Bellamy created the Salute just for the Pledge).

As Mitt Romney's flip flops has been talked about in the Main Stream Media, but not to the full extent as this 4 minute video that Democrats have created. This video may just help Ron Paul win the Iowa Caucus.

The S. 1867 "National Defense Authorization Act for Fiscal Year 2012" is calling the the military to detain U.S. citizens indefinitely.

Ron Paul vs. The Police State

On November 22, 2011 in the CNN National Security Debate; Ron Paul was the only person with a clear difference than every other candidate as all of the other's want to keep us under a police state, and not grant us our liberties.

The Fate of Lt. John Pike

After the incident at the University of California the Question that everyone is asking is if Lt. John Pike the Police Officer that used Military-Grade Pepper Stray on peaceful protesters at Occupy UC Davis gonna get fired?

This is Amerika: Home of the Oppressed

On November 19, 2011, an University of California Police Officer (Lt. John Pike) maced a line of students interlocking their arms in a sit in protest.

Ron Paul: Not Being Treated Fairly

With only 89 seconds in a hour debate on CBS, Ron Paul is now surging in the polls in Iowa and is now considered to be in the Top Four, consisting of Ron Paul, Newt Gingrich, Mitt Romney, and Herman Cain who were all tied in a Bloomberg Poll.

Senomyx and I have been emailing each other to get the Issue of HEK-293 resolved. But Senomyx instead of cooperating, has been lying to me.

In the CBS Debate, Ron Paul was only given 89 seconds to speak when the debate was national and was given 126 seconds when hardly anyone was viewing the debate. So the total amount was 235 seconds which is 3:35 minutes. 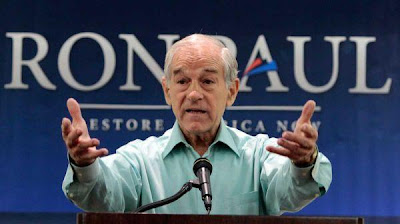 ﻿
CNBC said in an open letter for the People who voted for Ron Paul on their Official Poll:

﻿"After the debate, we put up a poll on our Web site asking who readers thought won the debate. You guys flooded it.

Now these Internet polls are admittedly unscientific and subject to hacking. In the end, they are really just a way to engage the reader and take a quick temperature reading of your audience. Nothing more and nothing less. The cyber equivalent of asking the room for a show of hands on a certain question. 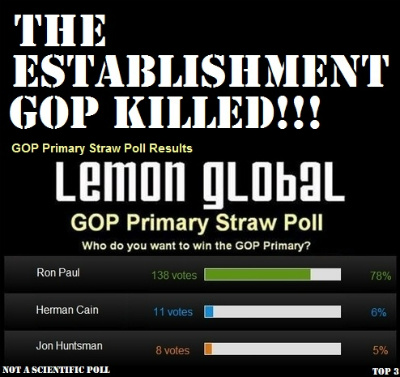